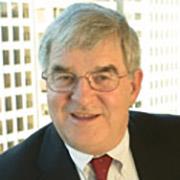 Mark W. Olson became Chairman of the Public Company Accounting Oversight Board in June 2006. He served until July 2009.

Before joining the Federal Reserve Board, Chairman Olson served as staff director of the Securities Subcommittee of the U.S. Senate Committee on Banking, Housing, and Urban Affairs. The subcommittee's legislative jurisdiction included the Securities and Exchange Commission, and accounting, securities, and insurance policy issues generally; the full committee jurisdiction also included banking and other financial institution and monetary policy issues.

Chairman Olson’s government service followed more than a decade as a partner with Ernst & Young LLP, and its predecessor, Arthur Young & Company, where he became national director of the Regulatory Consulting Practice for the financial services industry. During that time, he was invited to join a U.S. Treasury Department effort to assist Eastern European bankers in adapting to a free-market economy.

Chairman Olson began his career in 1966 in the banking industry, spending four years at First Bank System (now U.S. Bancorp), in Minneapolis, Minn. He left the bank to work for former U.S. House Representative Bill Frenzel of Minnesota, first in Washington as legislative director, then in Minnesota as director of the Minnesota office.

In 1976, Chairman Olson returned to banking to become president and CEO of Security State Bank in Fergus Falls, Minn., the bank his father was instrumental in chartering in 1957. Chairman Olson oversaw the bank until 1988. During this time, Chairman Olson was actively involved in developing legislative policy for the banking industry. This involvement culminated in 1986 with his election as President of the American Bankers Association.

Chairman Olson received a B.A. in economics from Saint Olaf College, in Northfield, Minn., where he was named a Distinguished Alumni in 2003. Chairman Olson passed away on September 12, 2018.

All speeches and statements by Former Chairman Olson