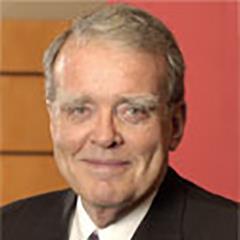 William J. McDonough became Chairman of the Public Company Accounting Oversight Board on June 11, 2003. He served until November 2005.

He joined the Board after 10 years as president and CEO of the Federal Reserve Bank of New York.

Chairman McDonough was named the eighth president of the New York Fed in 1993, and served as the vice chairman and a permanent voting member of the Federal Open Market Committee, the group responsible for formulating the nation’s monetary policy. He also served as a member of the Board of Directors of the Bank for International Settlements and chairman of the Basel Committee on Banking Supervision. Chairman McDonough joined the New York Fed in January 1992 as executive vice president, and head of the bank’s markets group as well as the manager of open market operations for the FOMC.

Before joining the New York Fed, Chairman McDonough spent 22 years with First Chicago Corp. and its bank, First National Bank of Chicago. He was vice chairman of the board and a director of the holding company from 1986 until his retirement in 1989.

Prior to his career with First Chicago, Chairman​ McDonough was with the U.S. State Department and was a U.S. Navy officer.

All speeches and statements by Former Chairman McDonough