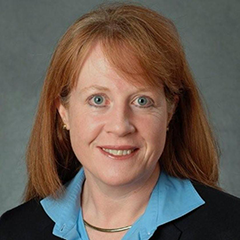 Megan Zietsman was appointed as a Board Member of the Public Company Accounting Oversight Board by the Securities and Exchange Commission in October 2020 and sworn in on November 20, 2020. She served until October 2021.

Before joining the PCAOB Board, Board Member Zietsman served as the PCAOB's Chief Auditor and Director of Professional Standards. In this role, she led the PCAOB's efforts to set standards for the audits of domestic and foreign public companies whose securities trade in the U.S., as well as the audits of broker-dealers that are registered with the SEC.

As Chief Auditor, she participated in meetings with the SEC, the Financial Accounting Standards Advisory Committee, the Consultative Advisory Groups of both the International Auditing and Assurance Standards Board and the International Ethics Standards Board for Accountants, among other regulatory and standard-setting organizations. She played a key role in communicating with investors, auditors, preparers, and audit committees with respect to the matters on the PCAOB's research and standard-setting agendas and the implementation of current standards.

Board Member Zietsman has 31 years of experience in the auditing profession. Prior to joining the PCAOB in 2019, she was a Partner in Deloitte & Touche LLP's professional practice network in the U.S., where she was responsible for leading activities relating to audit standard-setting, the global implementation of new and revised auditing standards and rules, and talent-related processes and initiatives. Board Member Zietsman began her career with Deloitte in South Africa in 1989 before moving to New York to join Deloitte's International Operations group in 1994 and later the Transaction Services group in 1998.

Board Member Zietsman served on the International Auditing and Assurance Standards Board from 2014 to 2019, including as the Deputy Chair from 2017 to 2019. She also served on the American Institute of CPAs’ Auditing Standards Board from 2007 to 2011. On these two boards, Board Member Zietsman served as a chair or member of many task forces and working groups focused on key initiatives and projects. Board Member Zietsman is a Certified Public Accountant and a Chartered Accountant (South Africa). She received a Bachelor of Commerce Degree in Accounting with honors from Rhodes University in South Africa.

Recent Speeches and Statements by Former Board Member Zietsman

All speeches and statements by Former Board Member Zietsman