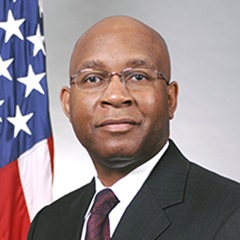 Anthony C. Thompson was appointed as a Board Member of the Public Company Accounting Oversight Board by the Securities and Exchange Commission in November 2021 and sworn in on January 3, 2022. He was reappointed in June 2022. His current term expires on October 24, 2027.

Prior to joining the PCAOB, Board Member Thompson served as the Executive Director and Chief Administrative Officer of the Commodity Futures Trading Commission (CFTC), where he oversaw the Division of Administration. Before joining the CFTC in 2011, Mr. Thompson held senior positions at the U.S. Department of Agriculture, where he was responsible for leading a workforce of more than 400 personnel and a broad range of programs, including budget and financial management.

Before entering civilian government service, Board Member Thompson served in the United States Air Force for 32 years, reaching the rank of Colonel, where he served as the Chief Budget Officer for the service branch after previously serving as Chief Financial Officer for a number of U.S. Air Force Bases. He earned a B.S. from Regis University, an M.B.A. from Golden Gate University, and an M.S. from Air War College.

Recent Speeches and Statements by Board Member Thompson

All speeches and statements by Board Member Thompson