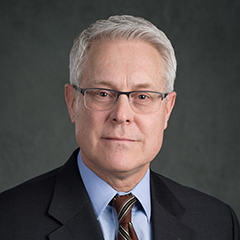 William D. Duhnke III was appointed Chairman of the Public Company Accounting Oversight Board by the Securities and Exchange Commission in December 2017 and sworn in on January 2, 2018. He served until June 2021.

Prior to joining the PCAOB, Chairman Duhnke was the majority staff director and general counsel to the U.S. Senate Committee on Rules and Administration under the leadership of Chairman Richard C. Shelby. He oversaw and managed the committee's consideration of the rules and administration of the Senate, and the organization and operation of the U.S. Congress. In this role, he also managed and organized the strategic planning and implementation process for the functional and technical infrastructure support of the Senate.

Chairman Duhnke served twice as staff director and general counsel to the Senate Committee on Banking, Housing, and Urban Affairs. He had oversight of all administrative and legal matters affecting the committee and its activities, including consideration of public policy affecting banking and other financial institutions and monetary and related international economic policy; and its oversight responsibility for the financial regulators, including the SEC and the PCAOB.

Between those terms working for the Banking Committee, Chairman Duhnke served as the Republican staff director and general counsel of the Senate Committee on Appropriations. In this role, he oversaw the committee's work to appropriately allocate the government's discretionary funds to government agencies, departments, and organizations for consideration by the full Senate.

Immediately prior to joining the Banking Committee for the first time in 2006, Chairman Duhnke was the staff director and general counsel for the Senate Select Committee on Intelligence, which oversees the intelligence activities and programs of the U.S. government.

From 1984 to 1991, Chairman Duhnke served in the U.S. Navy. He graduated first in his class as a Distinguished Naval Graduate from Aviation Officer Candidate School and joined Fleet Air Reconnaissance Squadron Three (VQ-3), where he earned his warfare specialty in the EC-130 Hercules aircraft. Chairman Duhnke's last assignment before completing his naval service as a Lieutenant was in the White House.

After leaving the Navy, he served from 1992-1995 on the staff of the Presidential Commission on the Assignment of Women in the Armed Forces, and the Defense Base Closure and Realignment Commission. He joined the staff of Senator Shelby following the completion of the 1993 round of base closures.

Chairman Duhnke earned a B.A. from the University of Wisconsin-Madison, and a J.D. from The Catholic University Columbus School of Law.

All speeches and statements by Former Chairman Duhnke