Thank you for the introduction. It is a pleasure to be here today and since you gave me the luxury of picking my own topic, I thought I would share my perspectives on audit quality challenges in the 21st century. The views that I express here are my own and do not necessarily reflect the views of other PCAOB Board members or staff.

In July of this year, we celebrated the 20th anniversary of the Sarbanes-Oxley Act of 2002, affectionately known as “SOX”. You may recall that the birth of SOX started with egregious corporate scandals. The first was Enron, a corporation that appeared to be a reputable energy company at the time. The company’s leadership created fictitious holdings, used special purpose entities to hide their debt and toxic assets, and falsified accounting records. Eventually, Enron filed for Bankruptcy in 2001, tumbling its share price from its height at $90.75 to a mere $.26 cents.1 This scandal spurred not only the demise of the company but also its auditor, Arthur Anderson, and eradicated the life savings of numerous hardworking employees and investors who had the utmost confidence in the company’s financial position.

Following suit in 2002 was another large accounting scandal, resulting in the bankruptcy of WorldCom, the 2nd largest long-distance telephone company at the time.2 Both Enron and WorldCom intentionally “cooked the books,” and again, Arthur Anderson turned a blind eye at WorldCom for inflating profits.

Given these extensive financial scandals, the federal government implemented sweeping reform by enacting SOX with bipartisan congressional support. With the enactment of SOX came the beginning of the PCAOB and the end of more than 100 years of self-regulation by the accounting profession. As a newly formed independent regulatory and oversight body, the PCAOB had its growing pains during the initial years and has evolved in maturing its programs throughout the past 20 years.

Today, the PCAOB has almost 1,700 registered firms, including U.S. and non-U.S. registered firms.3 In relation to foreign registered firms, most recently on August 26, 2022, PCAOB Chair Williams announced that the PCAOB had signed an agreement with People’s Republic of China authorities, which is the first step toward opening access for the PCAOB to inspect and investigate completely registered public accounting firms in mainland China and Hong Kong.4 Prior to her August 26, 2022 announcement, Chair Williams provided remarks on the celebration of the SOX 20th anniversary on July 28, 2022. In that speech, Chair Williams shared that the PCAOB has completed over 4,300 firm inspections in 55 countries, including reviewing more than 15,000 audits of public companies and over 1,000 broker-dealer engagements.5

To provide historical context, I would like to share some high-level trends of the deficiency rates for both the U.S. and Non-U.S. Global Network Firms (GNF) since the inception of our Inspection program. As illustrated, the Part I.A findings deficiency rate for U.S. GNFs in 2004 was about 18%, which trended downward through 2007 to about 10%, rising to over 40% at the peak in 2013, then settled back down to about 16% in 2020. The deficiency rate is the ratio of audits with findings relative to the total number of audits (with and without findings) reviewed by the PCAOB Inspections division. 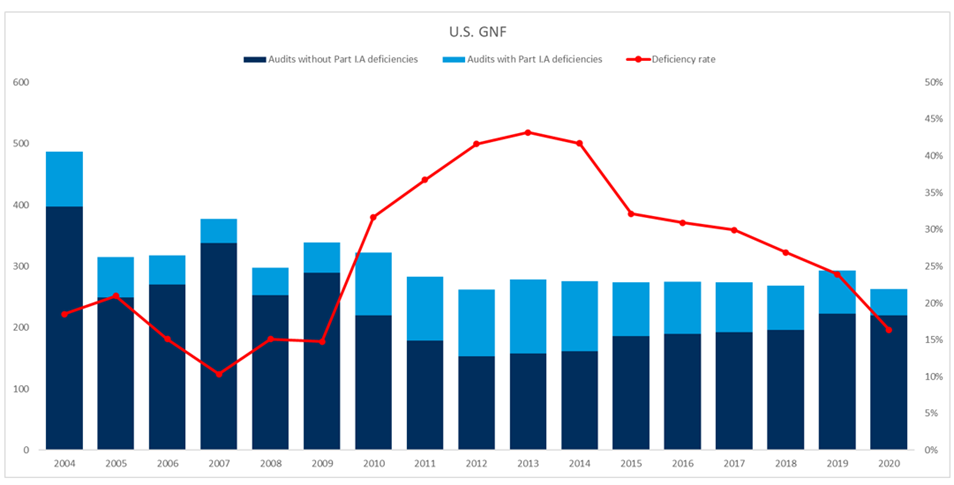 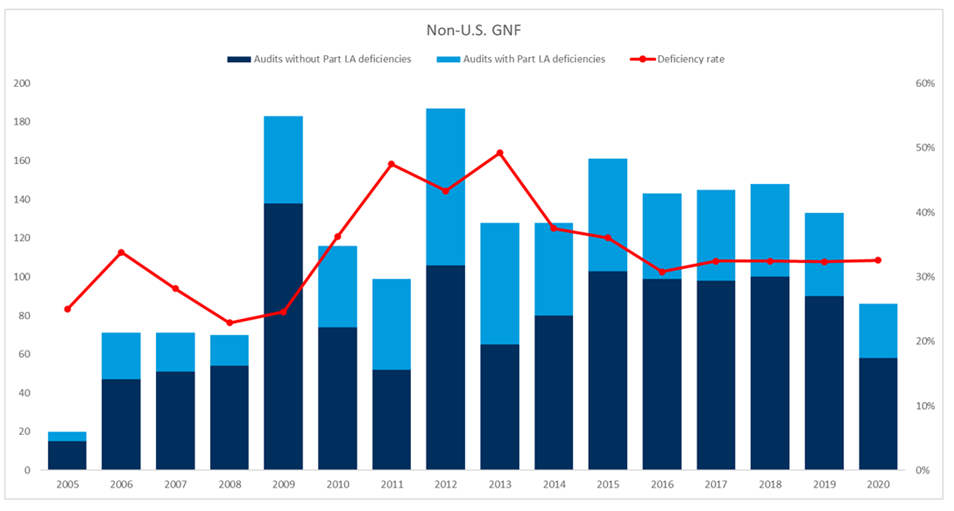 Although there is still a great deal of room for improvement, I believe that the PCAOB has fostered overall audit quality improvements and helped to regain investor trust within the capital markets over the last 20 years. As cited by one of the founding PCAOB Board members - Dan Goelzer - his article published by The CPA Journal February 2021 edition titled, “Audit Oversight and Effectiveness: Understanding the Past and Looking toward the Future ”, “Audit quality is hard to define and hard to measure, but most observers—including the major accounting firms—would likely agree that quality is higher today than it was in 2002”.6 To support this statement, Mr. Goelzer further cited two metrics published by Audit Analytics including the decline in restatements and SEC enforcement cases related to accounting and auditing issues, as well as the relatively high retail investor confidence based on annual surveys conducted by the Center for Audit Quality.

As a former audit professional, I believe in the beneficial impact that auditing provides to the capital markets ecosystem. Now as a regulator and a standard setter, I am inspired to drive audit quality even higher in order to cultivate greater investor trust in public company financial statements. As a self-proclaimed “data nerd,” I am passionate about leveraging data and technology to advance the mission of the PCAOB.

As we look ahead, I’d like to discuss the two critical areas impacting audit quality in the 21st century: technology and talent.

Since joining the PCAOB and in every public statement I have made, I continue to emphasize the importance of technology innovation and its impact on audit quality, and by extension investor protection. During my time at the U.S. Department of the Treasury (Treasury) in leading the government-wide implementation of the Digital Accountability and Transparency (DATA) Act which required over 100 federal agencies to publish their spending data in a structured format, I frequently spoke about the value of “unlocking” the data and the vision for a data-driven government. I came up with a simple formula “data + use = value ”. I think that this formula is applicable in the context of auditing in the 21st century. In the 21st century, I believe that the effective use of data is key to audit quality, so I tweaked my formula slightly as “data + use = audit quality”. The value of audit quality extends to investor protection and efficient capital markets. Let me break this formula down a bit further:

With light-speed technology advancements and continued market evolution, auditing is becoming more complex and digital. It’s my understanding that audit firms are investing in new tools that incorporate advanced technologies such as machine learning and artificial intelligence (AI) to promote audit quality. As a standard-setter, we too need to be forward-looking and adapt our standards to fit not only the current use of technology but also future use. Some people may be skeptical and consider these technological trends short-lived. If you would indulge me, I would like to take a poll here. By a show of hand, how many of you do NOT have devices with Alexa or Siri? Thank you. We have one. Alexa, Siri and similar technology are essentially AI. I recently started watching through my streaming device “Perry Mason”- the black and white version.  In watching these episodes, I started to notice that the advertisements on my streaming device were targeting my specific needs. These are examples of AI influencing our day-to-day lives. My daughter recently started playing Minecraft and I had to learn more about it. That is basically an early use case of the Metaverse.

A recent New York Times article titled “We Need to Talk About How Good A.I. Is Getting” highlighted the fast progress of AI development in recent years and the potential risks.7 The author stated “regulators and politicians need to get up to speed” to discuss seriously the societal opportunities and risks of AI. From an auditing perspective, how will AI change audit documentation? How will auditors assess the ethical use of AI by the issuers? The panel earlier on Digital Assets and Blockchain highlighted another technology that has challenged the auditing paradigm. How do auditors obtain assurance on the rights and obligations underlying digital assets when the underlying technology was designed to anonymize ownership of the assets? Not to mention Metaverse which has the potential to create its own digital economy. How will auditors validate transactions that take place in the Metaverse? These are challenging auditing issues. These fast-paced transformations compel the auditing profession to be proactive, to stay relevant and agile in this inevitable technological progression. Our standards therefore must evolve and reimagine audits that could be completely digital in nature as opposed to paper based.

As I continue to emphasize the importance of technology innovation and its impact on audit quality for investor protection, I need to emphasize that no technology can replace people. Without skilled professionals, there will be no audit quality. In recent months, I have become increasingly interested in the pipeline challenge of new talent for the accounting profession. Last month, one of the NPR talk shows published an episode titled “If the World Had no Accountants”.8 The host and guests discussed the shortage of CPAs and I would like to read a few quotes from that episode:

It was one thing to read or hear about this issue discussed with accounting insiders. When you hear about it on NPR, you know that it is affecting the broader population. So, what are the key drivers of this phenomenon?

I know all of you feel the pain of the CPA shortage directly and daily. Not only are we suffering from the “Great Resignation” and now the “Quiet Resignation” within the current workforce, but we also have a more daunting pipeline challenge glaring right at us. When we start to dissect this broader societal issue, we see that the downstream impact on the accounting and auditing profession will continue, and the audit quality could suffer greatly. In my opinion, this is a crisis. We cannot afford a world with no accountants or a capital market with no auditors.

Thank you for inviting me to this event. It has been a pleasure speaking to you today, and now I’d like to open it up for any questions.